What did you do with my paschal candle? 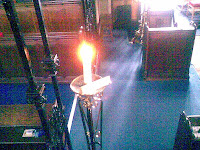 This is not a question I often ask. Picture the scene. It's 10 to 9 and I am nipping up the aisle to locate a pew sheet so I can make all the announcements correctly at the 9am Mass when Shirley asks the fatal question: "Where's the paschal candle Rector?"

I turn to point at it. I mean, it is the best part of 6ft tall. Bleeding obvious where it is, innit? And... it's. Not. There. It was there last night. What have I done with it? Can I remember what I was doing last night. Yup, I can. Haven't had a drink since Ash Wednesday, so my memory is crystal clear. It wisnae me. I panic slightly, then reassure myself. It's not that serious. I mean, not like the time I lost the baby we were supposed to be baptising. Still haven't found the little blighter. I think the family just forgot to turn up. Or the time I blew up the baby Jesus at Midnight Mass in Kirkcaldy. Wasn't my fault the connection to the crib light was damp. Honest.

We start to look. It's not in the Lady Chapel or up by the font. Wee John might have put it there, not realising it's supposed to stay out front until Pentecost. Nope. No sign of it. Finally, we find it in the depths of the servers vestry. And the candle is snapped in two pieces. Broke.

How the heck did that happen? Good grief, they're pretty solid things Paschal Candles. Then, a light breaks in on Dougal's mind. "Where's wee John?"

He's up front, doing something obscure with a votive candle. "John, what did you do with my paschal candle?" I ask suspiciously. Not a question often asked in polite liturgical circles. Last time they asked that at St Stephen's House Oxford, several students were suspended. "Oh, yes, I was going to tell you. I bumped into it." It all makes sense now. Wee John is blind in one eye and has a knack of colliding with things on his blind side. Like Paschal Candles, Rectors and tea urns. The supposedly immovable object of 2ft 6ins of Hayes and Finches best Easter beeswax has met the irresistable force of Wee John. Never mind, we can sort it out later. I consider getting him to stand in its place, holding the lightable half of the candle like the Statue of Liberty, but decide against it. He is nearly 80 and the Children and Vulnerable Adults Protection Officer would give me hell. Probably.

So I disappear and vest, go into Church and sit prayerfully composing myself to lead the faithful in the Eucharistic mysteries. I open my eyes...and there's a paschal candlestick coming down the aisle. It has legs. What the??? Wee John passes my stall, puts the candlestick down, finds a taper and lights the bottom half of the busted candle, which he's managed to scrape out a wick from. The faithful look bemused and gaze wondering to me for an explanation of this new and strange ritual observance. Something I picked up at Mirfield last week? Who knows? Composing myself, I explain what's happened and start the service. All is well, despite the first lesson from the NRSV version of Acts having St Paul leading the Athenians in "groping for God". You can get defrocked for that these days.

Thank God for Wee John. Every Church should have one. In Lent, he prayed for deliverence from "Charismatic Psychopaths"during the intercessions. I think he meant the likes of Robert Mugabe and Stalin. Fr Alsadair, who was visiting from SF, nearly had hysterics. Besides, there is something very symbolic and profound about the light of the Risen Christ coming from something that is broken and not whole or perfect. The picture I took really can be an icon for today.
Posted by fr dougal at 14:02