Back in the Old Country! 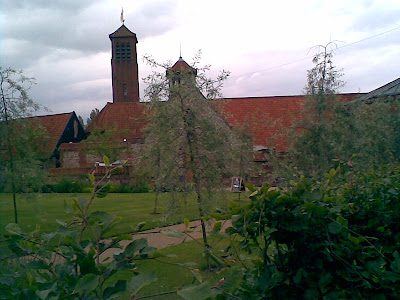 The Anglican Shrine of Our Lady of Walsingham, Norfolk. 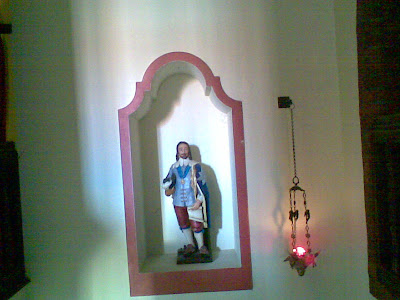 Statue of King Charles the Martyr

founder of the Diocese of Edinburgh

near the Orthodox Chapel in the Shrine. 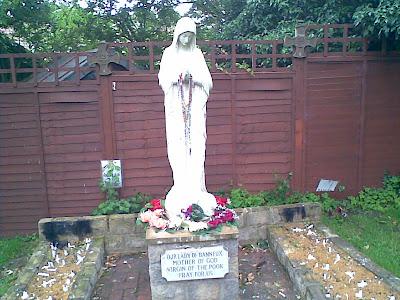 Madonna in the garden of the RC Pilgrim accommodation.

Oh well, that's another pilgrimage to Walsingham over and done with. And it was good. Starting 6 years ago with 4 of us in a car, the Scottish Ecumenical has grown to 2 minibus loads and 30 pilgrims. Our 2nd youngest pilgrim Elizabeth (5 in September) has actually been on 5 out of 6 trips - she was in the womb on her 1st one! There is a lay by on the M1 forever associated in my mind with an emergency comfort stop caused by that babe pressing on the maternal bladder!

It's a nice mix of RC and Episcopal and doing our own thing and joining in. Our own thing is daily Morning Prayer with up to 20 saying it together, a daily Mass, trips to the RC shrine for a renewal of Baptismal vows and the Stations of the Cross and Intercessions in the Anglican Shrine using the Rosary as a structure. Joining in is the Shrine's Evening Prayer, the Pilgrimage Mass & Processions and the healing Liturgy with Sprinkling from the Well, laying on of hands and Anointing.

As ever, it's not the Lacey Cotta bits that move me to the core. It's the silence and the healing. After the Image of Our Lady has been processed on Saturday evening and Benediction given, the Sacrament is left exposed on the altar for an hour of adoration and silent prayer. The quality of the prayerful silence in the darkened shrine with hundreds of pilgrims is rare and precious. and this year for the first time in ages it moved me do do something I haven't done for a long time. I went to confession.

Now, I gave this particular spiritual discipline up several years ago. Partly, I was in a place where my self image and sense of worth was very battered and it just wasn't healthy to do the "we are miserable offenders and there is no health in us" trip and partly it had become not just a discipline but a burden. Cranmer has a point when he describes the burden of sin as "intolerable" - it can be. But when you are trying to tell yourself you're loved and valued by God as you are, it isn't a useful way of thinking. But on this pilgrimage it came to me this isn't the way I wanted to approach confession. I wanted to make a formal act at one level, consciously surrendering my will to that of God and putting myself in the path of his merciful loving kindness. But I also saw it in the wider context of healing. It went with the healing liturgy and the sense I went to Walsingham with this time of having experienced some healing myself. God's forgiveness is in and of itself an intrinsic part of the healing of the body, mind and soul of the Christian. And for me, at this stage, that was a gift I was able to accept in and through the sacrament of reconciliation.

I wasn't disappointed. I was received graciously and thankfully by the priest and left with the prickle of thankful tears in my eyes, knowing I was back in good place with God. By which I do not mean I have relapsed into conservative Anglo-Catholicism! I still accept women's ordination and gay rights! No Damascus U-turns for Dougal!

I also found a fabulous wee orthodox Chapel upstairs in the Shrine for saying my own prayers and kissing ikon's etc! Near the statue of another who was born in Dunfermline, King Charles the Martyr, founder of the Diocese in which I currently serve. It was a very good trip and I can recommend the place strongly. And the intercession of OLW seems to work. Well, I'm still on the straight and narrow. Heavenly Ma, Ta!

"And tonight, Matthew, I'll be...a thurifer in Dumbarton!". No rest for the forgiven!
Posted by fr dougal at 09:02